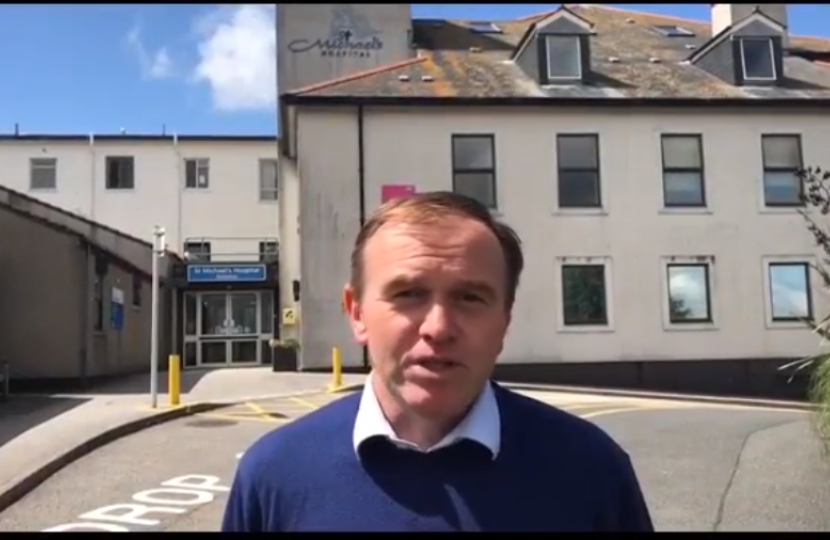 George has been contacted by many constituents about NHS England’s consultation on a new model for radiotherapy services in England. He is concerned about reports of people potentially having to travel outside of Cornwall for treatment.

He went on to discuss radiotherapy services in Cornwall on Radio Cornwall. A transcript is below. Alternatively, you can listen to the interview at:

Laurence Reed: Joining us live on the line is the MP for Camborne and Redruth, George Eustice, also a DEFRA Minister. George, thank you for coming on. I appreciate your promptness at getting involved in this debate. Steve Double, Scott Mann and Derek Thomas have all been on this programme and seem to be fighting to keep all the cancer services here in Cornwall. Are you on the same page as them?

George Eustice: Yes indeed. We're all working together on this because we're all getting a lot of concerned constituents come to us with this issue. In fact, I had quite a lot of letters on this back in November and December last year. Before Christmas, I wrote to the NHS to highlight those concerns. My general approach to these things is sometimes, when it comes to rare cancers, having centres of excellence with specialist expertise can actually give people the right treatment. But, my view is that when it comes to radiotherapy, because it’s a treatment that can last for many days, maybe weeks, and it does tire people having lots of travel when you're having radiotherapy, is not conducive to your recovery. I think that with some of those core services like radiotherapy, which you need for all types of cancer, we need to ensure we can deliver those close to people's homes.

Laurence Reed: OK, our listeners have been asking me to ask all our MPs if you can have a private meeting with Jeremy Hunt? Can you make sure he's well aware of the situation in Cornwall?

George Eustice: Yes, we can do that. And indeed we do meet health ministers quite regularly to talk about some of the issues affecting Cornwall, not least obviously with RCHT currently in special measures. I have had a response from the NHS and there is some reassurance. The first thing to say is that this is not about cuts to the NHS. Indeed, this is about £130 million of new money coming in to invest in improved radiotherapy. The other thing to be clear about is that they are not closing any centres. I know there is concern around the Sunrise Centre in particular. There are absolutely no plans to close centres. This is about creating networks that can give better treatment for very rare cancers.

George Eustice: The point is, and I raised this last week when we had a meeting with the NHS locally, their estimate is that there may be, in Cornwall at any one time, around 300 people who might be affected by those sorts of cancers. But to put that in context, at any time, because cancer sadly is a very widespread disease, we have around 20,000 people with cancer. So they are talking about a relatively small percentage of people with particular cancers that they believe should be covered by this. As I said, I still have concerns about radiotherapy in that context.

Laurence Reed: You heard the oncologist there briefly, and Janet Shepherd who used to run the Sunrise Centre has told us on this programme that there is absolutely no evidence that specialist services in regional centres are more effective.

George Eustice: Well there's a consultation running and obviously the views of specialist oncologists can look at that. But we all have our own experiences of cancer, with loved ones who've been affected by cancer. My father had a rare type of cancer a few years ago and in fact it was going to be very difficult to do even the radiotherapy for that in Cornwall. He actually went to the Royal Marsden, where they had specialist expertise. That was the wish of the people who led on this in both Treliske and in Derriford, to have that expertise nationally to look at that case. So there are examples where being in the right place, where you’ve got that specialist equipment and specialist knowledge is the right thing for patients.

Laurence Reed: I don't think anyone would argue with that, but what they would be arguing about is that you can't expect someone in your constituency to spend 6 weeks’ worth of treatment everyday for an hour going to Derriford or Exeter or Bristol for radiotherapy treatment. You cannot expect it. Apart from the financial implications, they couldn't physically do it.

George Eustice: No, exactly. That is why the very first point I made to you is that while I think on some cancers having the right specialist people who will give the best possible treatment, it’s right to have some centres of excellence, I do see radiotherapy treatment as being difficult. Firstly, because you have long, sustained treatment and secondly, because it is tiring as well.

Laurence Reed: Just quickly and finally, do you share the concerns that this is all part of a slippery slope of downgrading services in Cornwall? We heard from the oncologist who said that if you start taking services away, however you dress it up, you will get fewer experts based in Cornwall. It's a slippery slope.

George Eustice: Well, I think on this point that this is where Derek Thomas had a very good point. We shouldn’t always be looking at heading East on these things. It's quite possible to have centres of excellence in the West. Indeed, if you look at places like St Michael's, that is a national and regional centre of excellence in treating breast cancer. And people travel down for that. As Derek pointed out, the A30 runs in both directions both west as well as east.

Laurence Reed: Well, maybe that’d be good for you MPs, and you’re all Conservative, to put pressure on health ministers and say look, part of this £130 million, rather than any discussion about watering down services, can some of that money be reinvested into Cornwall. The Sunrise Centre is a gold standard centre already.

George Eustice: Absolutely. The Sunrise Centre is a gold standard and it may be therefore that it is the right place, in a new radiotherapy network, to do some of the more specialist work because they've got the specialist expertise there, they've got the equipment, and they’ve got recent investment. So I think it’s absolutely right to say yes, the principal of specialist centres might be right, but secondly we have to be careful when it comes to radiotherapy because of the length of treatment and the distance to travel.

Laurence Reed: Can our listeners be absolutely assured, and you’ve been an MP in Cornwall for many years, they know who you are George, can they be absolutely sure that you will be absolutely fighting the Sunrise’s case?

George Eustice: Yes, absolutely. As I said, we have already made that case and I've been told that there is not going to be any closure of centres. What they are really looking at is creating a network where, on some specialist work, they can do that differently. But there's no reason why that work could not be done in Cornwall rather than Derriford or Exeter.

Laurence Reed: That's exactly what we want to hear.