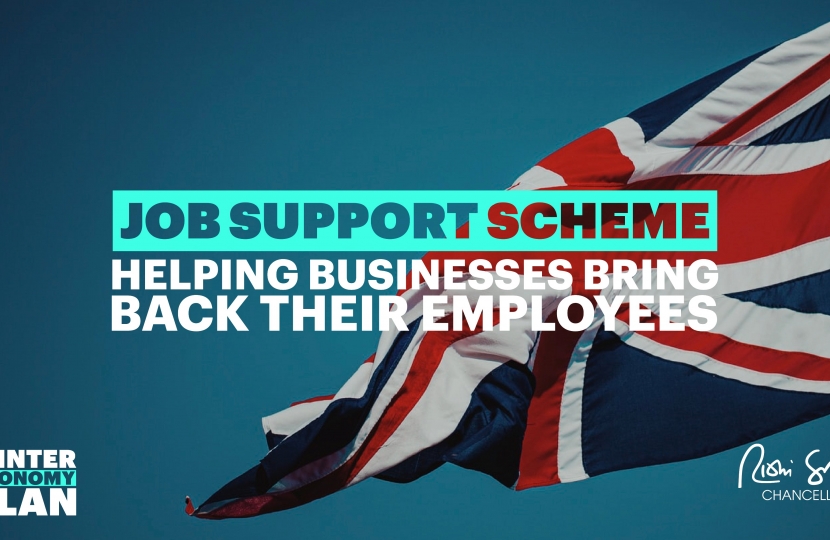 Now the economy is opening up, the Government is targeting support on those businesses that need it most: companies that have been impacted by coronavirus, helping them to keep staff on reduced hours rather than laying them off, and protecting people’s wages. Our aim is to protect viable jobs in businesses who are facing lower demand over the winter months due to coronavirus.

That is why the Government is launching a new employment scheme – the Job Support Scheme. The company will continue to pay its employee for time worked, but the burden of hours not worked will be shared equally between the employee, employer and government – one third each way. The Scheme is focused on viable jobs, so employees need to be working at least a 33% of the time, and this % will move up over time.

All businesses, not just those who used the furlough scheme. Larger businesses (not SMEs) will only be eligible if their revenue has declined. Furthermore, there will be an expectation that large companies using the scheme will be constrained in their ability to make dividend payments or capital distributions to shareholders, and employees will not be able to be made redundant or given notice whilst on the scheme.

The Scheme will open from 1 November, and run for six months until the end of April 2021.

Employers can use the Job Support Scheme as well as claim the Jobs Retention Bonus. Employers now have three options:

To ensure parity between employees and self-employed, the Government will also provide a grant extension for self-employed small businesses who used the existing SEISS scheme. Eligibility criteria will be refined to check whether the self-employed trader is still viable and trading and is suffering lower revenues as a result of coronavirus. The grant will match the average grant of the Job Support Scheme, and represent 20% of three-month earnings, for November to January.

As of October 22nd, additional measures have been announced.