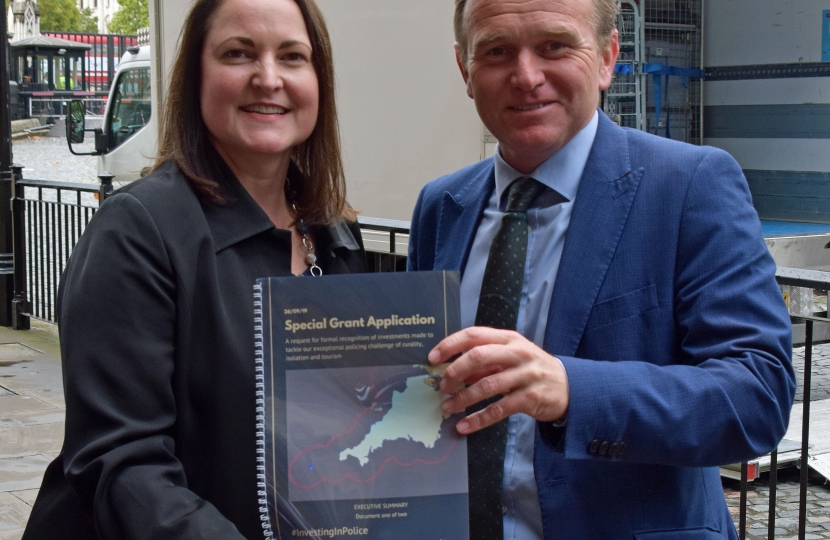 George Eustice, MP for Camborne and Redruth has today welcomed the news that Devon and Cornwall Police will be allocated an extra 141 police officers as part of the Government's drive to deliver 20,000 police officers over the next three years.

Strengthening police numbers is a priority for the government, which is providing £750 million to support forces to recruit up to 6,000 additional officers onto our streets by the end of 2020-21, the first stage in this new uplift. This is thanks to the additional funding announced by the Chancellor in the Spending Review.

All officers recruited as part of the 20,000 uplift will be additional to those hired to fill existing vacancies. They are also on top of the extra officers already being recruited because of the £1 billion increase in police funding for 2019-20, which includes money from council tax and for serious violence.

George commented, "141 extra police officers for Devon and Cornwall is great news. The new police officers are part of the recruitment of the first tranche of 6,000 of Boris Johnson’s 20,000 new police officers. The Government remains committed to keeping our communities safe and the Prime Minister's pledge clearly demonstrates this."

Home Secretary Priti Patel said, "The public are clear they want to see more police officers on their streets, whether they live in the city or the countryside. This is the people’s priority and it is exactly what the Government is delivering. Every single police force in England and Wales will be able to recruit additional officers this year to help keep all of our communities safer."

You can read further information about the work that the Government is carrying out to keep all of our communities safe at: https://www.gov.uk/government/news/home-office-announces-first-wave-of-20000-police-officer-uplift

George Eustice has today welcomed the news that the Prime Minister has announced additional funding to level up Camborne. The announcement is part of a wider economic package to accelerate infrastructure projects, fuelling jobs and the country’s economic recovery following coronavirus.