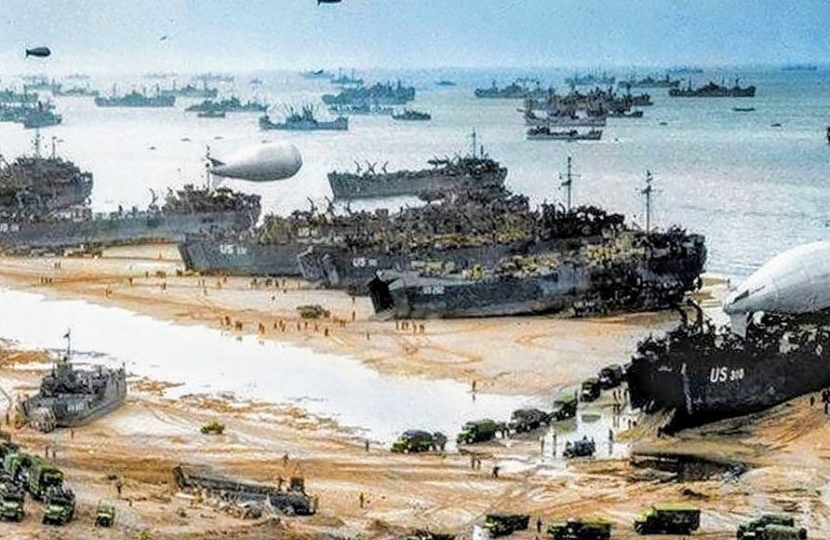 75 years ago today, thousands of young men were taking part in the largest combined land, air and naval operation in history. This operation was D-Day.

D-Day was and still remains the largest combined land, air and naval operation in history. The invasion was conducted in two main phases – an airborne assault and amphibious landings. Shortly after midnight on 6th June, over 18,000 Allied paratroopers were dropped into the invasion area to provide tactical support for infantry divisions on the beaches. Following this, on the morning of June 6th some 156,000 British, American and Canadian troops launched from the sea and air on to French soil across 50 miles of Normandy coastline. The force included 5,300 ships and craft, 1,500 tanks and 12,000 planes.

The D-Day landings were the first essential step for the Allied forces to liberate north-west Europe from German occupation. By sunset there were an estimated 10,000 casualties and more than 4,400 confirmed dead. The success of the D-Day landings lay in the fact that in the three months after the landings, the northern part of France would be freed, and the invasion force would be preparing to enter Germany, where they would meet up with Soviet forces moving in from the East.

George said, "We owe so much to the many young men who took part in the D-Day landings with large numbers of them paying the ultimate sacrifice and never returning home to their loved ones. These young men belonged to  a special generation. They didn't boast, they didn't fuss, they did their duty and they laid down their lives so that we may have a better world. Today it is right that we thank them and remember their sacrifice."

George Eustice, Member of Parliament for Camborne, Redruth and Hayle has welcomed the news that three good causes across the constituency have received funding raised by players of People's Postcode Lottery.