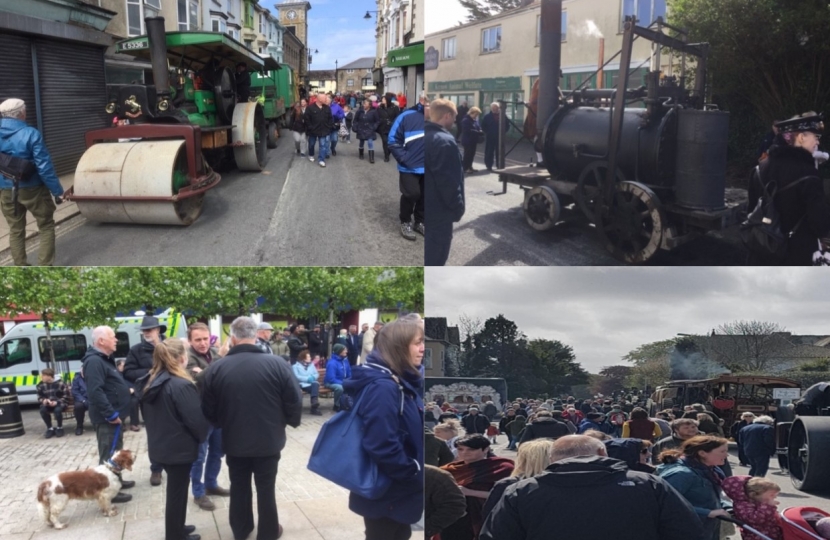 On Saturday, George Eustice MP attended the annual Trevithick Day celebrations in Camborne. The days commemorates the achievements of Richard Trevithick, which epitomise the contribution made by Cornwall to the Industrial Revolution.

Hundreds of school children, families and members of the community came together. There was a parade which included a replica of the Puffing Devil, which is always the star of the show.

George said, "It was a cold and blustery start to Trevithick Day in Camborne but by lunch time the sun was up and the crowds came out to celebrate the achievements of Richard Trevithick, the inventor of the steam locomotive. Outside my office was the engine that has this week travelled 600 miles from Staffordshire as part of the True 600 Challenge to raise money for mental health charities in memory of Ben True. Richard Trevithick was criticised for trying new principles, but knew in his heart that he had brought forward new ideas that would be of huge value to this country. For many years his achievements were not really recognised, which makes it all the more important that we celebrate them now. This year, there was a fantastic turnout, and it was a great day of celebrations."

Schools in Camborne, Redruth and Hayle go from strength to strength

George Eustice, MP for Camborne, Redruth and Hayle, has today welcomed the news that schools across the constituency have continued to improve with many seeing an increase in the proportion of pupils achieving the expected standard in reading, writing and mathematics last year.