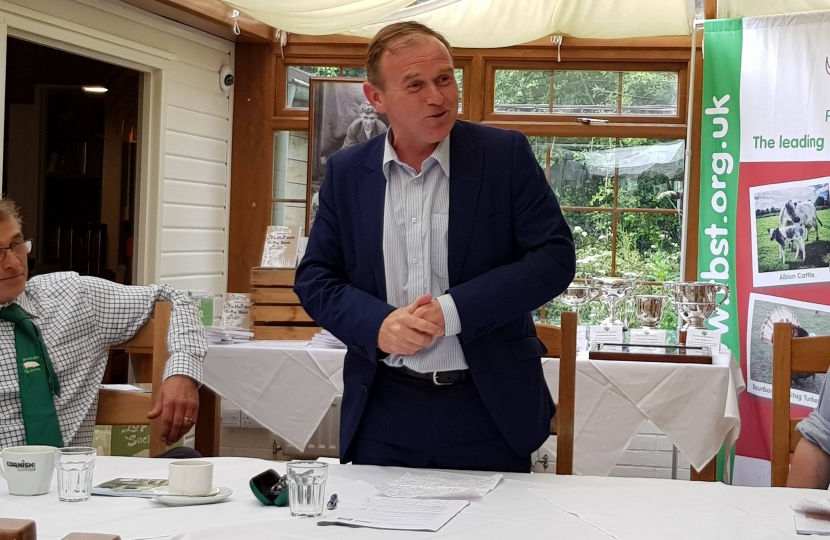 George Eustice, MP for Camborne, Redruth and Hayle has today argued that native breeds are a public good which must be supported in the Agriculture Bill, at the launch of the RBST project to save the rare British Lop pig.

In conjunction with work that George had undertaken when he was a Minister at the Department for Environment, Food and Rural Affairs (DEFRA), George confirmed that he had tabled appropriate amendments to The Bill.

George said, “Protecting the genetic diversity that exists within our rare breeds and native breeds is a crucial public good that should be explicitly provided for in the new Agriculture Bill.  The genetic resources contained within rare and native breeds gives our livestock industry the ability to adapt to new challenges around disease and to changing approaches in livestock husbandry.  Defra already supports genetic diversity in crops through projects like the National Fruit Collection at Brogdale, the National Pea Collection and the Millenium Seed Bank.  It is time for diversity in farm animal genetics to be placed on the same footing and recognised and supported as a public good.”

Christopher Price, RBST Chief Executive said, “Our native livestock are a fundamental part of our native biodiversity and need to be supported in much the same way as wild  animals and for much the same reasons, so we very much support George Eustice’s amendments and hope they will be backed by every MP with an interest in the future of British agriculture.”

Mr Eustice has tabled two amendments to the Bill. The first changes clause 1 to read “managing land water or livestock” rather than just “land and water”. The second defines “natural heritage” as including biodiversity and genetic resources. Taken together the changes bring support for rare breeds and native breeds squarely within scope as a “public good” under clause 1.

George has also recently secured a key commitment from the Department for Environment, Food and Rural Affairs to hold a workshop on the future of Native and Rare British Breeds at DEFRA Questions. You can watch a clip of the debate at: https://www.georgeeustice.org.uk/news/george-secures-key-government-com…

George Eustice has today welcomed the news that the Prime Minister has announced additional funding to level up Camborne. The announcement is part of a wider economic package to accelerate infrastructure projects, fuelling jobs and the country’s economic recovery following coronavirus.