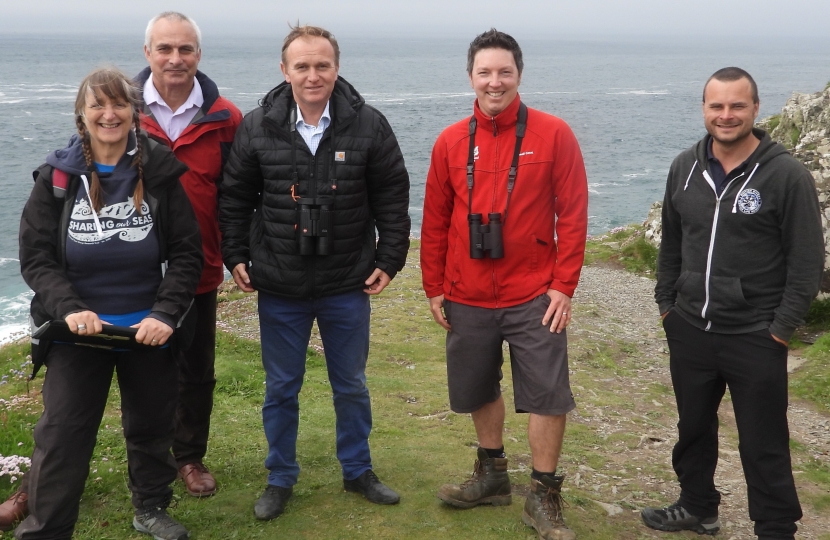 George Eustice, Member of Parliament for Camborne, Redruth and Hayle, recently met with leaders of the Cornwall Seal Group Research Trust (CSGRT) to discuss disturbance and other increasing issues facing our grey seals.

During the visit George met with Sue Sayer, Founder of the CSGRT as well as Richard Bellamy (Head of Engagement for the National Lottery Heritage Fund), Steve Sudworth (Lead Ranger at the National Trust) and Dan Jarvis (Welfare Development and Field Support Officer for British Divers Marine Life Rescue).

Serious disturbance incidents and seals affected have more than doubled between 2011 and 2019. More seals are seriously affected as haul out numbers peak, whilst disturbance incidents peak when more people are around the coast in summer and early autumn. After lockdown, Aug 2020 was the worst Aug on record for the number of seals disturbed. A recent incident showed the impact that just a single kayaker can have as 15 of 18 seals were scared into stampeding from offshore rocks.  This is just one issue facing seals. Other cumulative threats include entanglement, by-catch, marine plastics, pollution, and climate change.

Building on their DEFRA Green Recovery Challenge Fund awareness raising work, CSGRT hopes to improve current legislation to make the disturbance of seals illegal which will protect them like whales and dolphins.

“Recently I visited a seal site in West Cornwall to meet with the leaders of the Cornwall Seal Group Research Trust, to hear about their extensive work on seal conservation. Grey seals are frequently spotted all along the Cornish coastline.

Last year, the Cornwall Seal Group Research Trust was one of the first to benefit from the Government’s Green Recovery Challenge Fund, to support the work that they do to protect our seals.”

“Seals are more vulnerable than whales and dolphins spending vital rest time on land. Seals bring stories about the state of our seas to us on shore. We want people to enjoy, respect and protect seals. Impacts we have on seals are mostly invisible (disturbance always wastes energy, leads to broken bones and can be fatal months later).

Most marine issues need complex global solutions. The great news is that we can all solve disturbance simply, quickly and easily today...by GIVING SEALS SPACE and LEAVING THEM HOW WE FOUND THEM.”