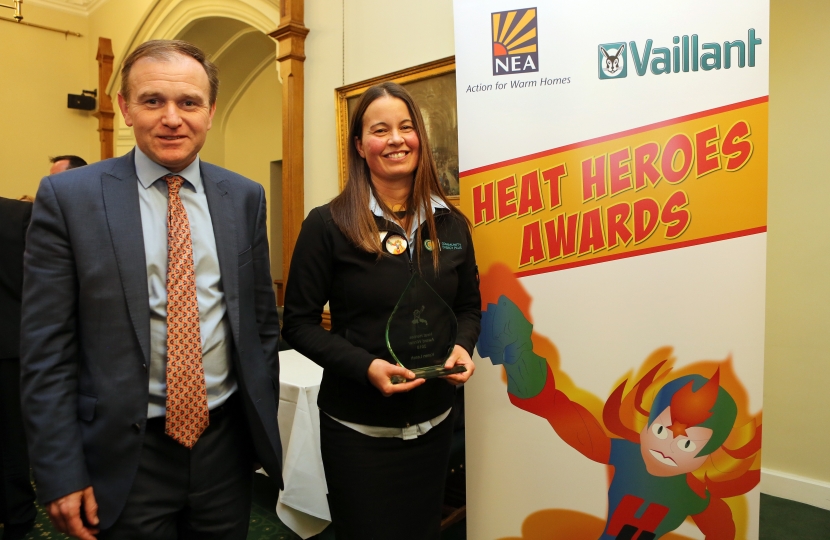 George Eustice, Local MP for Camborne, Redruth and Hayle, recently attended the National Energy Action Heat Heroes awards event to hear about the great work that is being done locally to help those who are vulnerable and suffer from fuel poverty.

At the event, George met Karen Leach, Energy Wise Caseworker at Community Energy Plus who has done some fantastic work helping vulnerable people in the constituency.

The NEA is the national fuel poverty charity and the Heat Heroes Awards aim to recognise individuals who have made a significant contribution to helping people living in fuel poverty in their local community, either at work or in volunteer activities outside the workplace.

Karen was amongst seventeen winners from England and Wales. Karen has almost ten years’ experience of providing phone-based energy advice for Community Energy Plus and in the last three years Karen’s role has broadened significantly and she helped to shape and deliver CEPs in-Home Advice, Hand-holding and Advocacy services. This includes the Big Lottery Funded Energy Wise Project which she now works within as a caseworker. Karen is experienced at putting vulnerable clients at ease and works skilfully and tactfully through the issues that are contributing to each client’s energy issues. She also deploys the tenacious aspect of her character to good effect when resolving issues with service suppliers such as mis-sold heating systems, faulty heater installations and energy billing errors.

Karen recently supported an elderly client with multiple health problems who had been door knocked and subsequently sold and air-to-air source heat pump which was unsuitable for his property and heating needs. With insufficient savings to pay the £5,000 total cost, he was paying the company monthly prior to the heating being installed. He contacted CEP as he was having second thoughts about the heating system. A home visit was provided and it was established that the client qualified for a grant for a first time central heating system through Cornwall Council’s Warm & Well project so Karen completed the application form with him which has been accepted. Karen contacted the heating company and used her negotiation skills to make the case for the vulnerable client to be given a full refund which was also successful.

George Eustice said, "It was great to meet Karen Leach at the National Energy Action Awards and hear about the fantastic work that she is doing locally to help vulnerable clients and resolving issues with service providers.

National Energy Action are doing some valuable work across the country and I know that there are a lot of good schemes and assistance available to those who are facing fuel poverty. It is important that those who need them most are aware of these services and are assisted in accessing the support which is available."