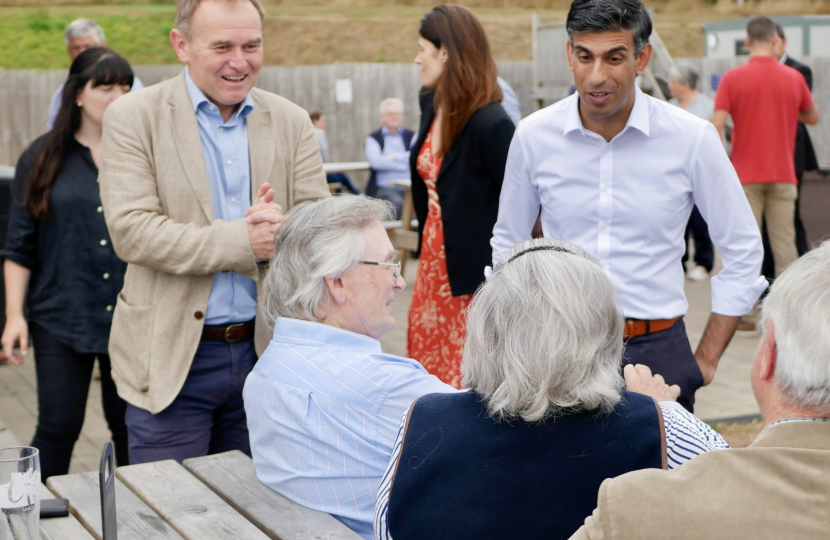 Now that Parliament is in recess for the summer, it is great to be able to get back to Camborne and spend August in the constituency with my family.  July has been a turbulent month in politics and the two remaining candidates to be the next leader of the Conservative Party will be spending the next four weeks getting around the country to meet as many Party members as possible.

Rishi Sunak was in Cornwall earlier this week setting out his approach.  What we need most in any Prime Minister is good judgement.  The decisions that come their way are usually difficult ones.  They need to keep a level head under pressure, grasp huge amounts of detail on multiple policy issues and make the right judgement call.  My view is that Rishi Sunak is the best candidate to so that so I will be backing him

The contest has opened up the debate on many different issues.  The problem of no-shows at doctors and hospital appointments has been highlighted.  There is a backlog for NHS operations as we come out of the pandemic and doctors’ surgeries are under intense pressure but there are around 10 million missed appointments per year where people don’t show up but don’t bother to cancel their appointment meaning the opportunity can’t be offered to someone else.  Cutting the number of no-shows could significantly ease the pressure on the system.

There was also controversy this week when Liz Truss outlined a plan to regionalise public sector pay and to pay public sector workers like doctors, nurses, and teachers less in areas where average pay was lower.  It is one of those ideas that sounds better when written in a pamphlet for some Westminster Think Tank than it does in the real world.  In places like Cornwall, we have lower average earnings, but we also struggle to recruit doctors and nurses now.  The whole idea of moving more civil servants out of London and into other parts of the country is to spread public sector spending more evenly and fairly.  Regionalising pay would be a very bad idea and thankfully Liz Truss has now confirmed she would abandon the plan.

The big divide has been over the public finances.  Both candidates would like to be able to reduce taxes, but Liz Truss has said she will borrow money to find early tax cuts and Rishi Sunak has said that borrowing and spending lots more money when there is already inflation would make inflation go higher still and risk higher interest rates and mortgage payments.  Rishi argues that we need to settle the public finances and get inflation under control before introducing future reductions in tax.

It is not ideal changing Prime Ministers part way through a parliament when you are in government but at least the process of selecting a new leader has been relatively swift. We narrowed it down to the final two candidates in a little over a week and ballot papers will be going out to Conservative Party members this week with a new leader in place in the first week of September.

Our next Prime Minister

What we need most in any Prime Minister is good judgement. The decisions that come their way are invariably difficult, where either course chosen could go wrong. They need to be able to understand the detail and grasp complex issues quickly.