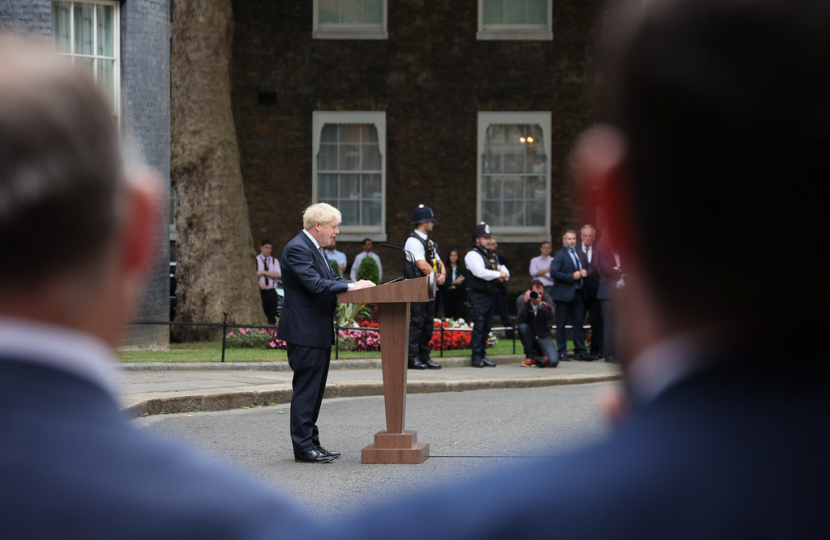 The power in the office of any Prime Minister is always more fragile than it sometimes appears from the outside.  We don’t have a presidential system with a directly elected mandate for a single individual The powers that any Prime Minister wields are on loan from the Queen and she only loans them to people who can command the confidence of Parliament.  The Cabinet is drawn from Parliament so that it is directly connected with elected representatives. A Prime Minister who invests the effort to reach an agreement with his own Cabinet is more likely to retain the confidence of Parliament.

The string of allegations around parties in Downing Street during lockdown was hugely damaging to Boris Johnson.  It is entirely understandable why people would feel anger since everyone has stories of funerals they couldn’t attend or loved ones they couldn’t visit.  At the beginning of June, in a confidence vote among Conservative MPs, 148 of his own colleagues voted against him.  The writing was on the wall from that moment, and it was always going to be very difficult for him to regain his authority.

In recent months, I have had hundreds of letters and emails from people telling me what they thought.  Some said that they wanted him to go, and some said they wanted him to stay.  I have known Boris Johnson for around twenty years so have a good understanding of both his strengths and his weaknesses.  I didn’t campaign for him during the last Conservative leadership contest in 2019 because I feared that his weaknesses would lead to problems.  I backed a different candidate.  However, when the Conservative Party elected him as the leader, I am a great believer that any Party must come together, unite and work as a team, so I took a position in his Government to play my part.

When you take a position in Government, you should offer your counsel and advice in private and defend a collective position in public.  After the confidence vote in June, I advised his office that they only had a short window in which to repair confidence and they needed to work very hard on building bridges and changing the approach.  He didn’t manage to do that and it’s not that clear he properly understood the need to.

Last week after the resignation of Rishi Sunak, his Chancellor, over an important policy difference, it wasn’t possible for the Prime Minister to carry on.  Some Ministers resigned, but most others, myself included, privately communicated to him that he should accept reality and announce his own resignation.  It was honest advice that he needed to hear from those who had been loyal to him and then he needed to be given the space to reflect on it overnight and reach that position in his own mind.  I am pleased that he did the right thing the following morning.

Whatever people think about Boris Johnson, he may have had flaws, but I never doubted that he loved this country and wanted to get important changes done.  He broke the deadlock over Brexit which will be his most important legacy.  Few Prime Ministers manage to leave on their own terms and the end is always sudden, chaotic, and traumatic for those around them.  However, it is just our constitution working as it is designed to work and the leadership election process now underway will establish a new Prime Minister.