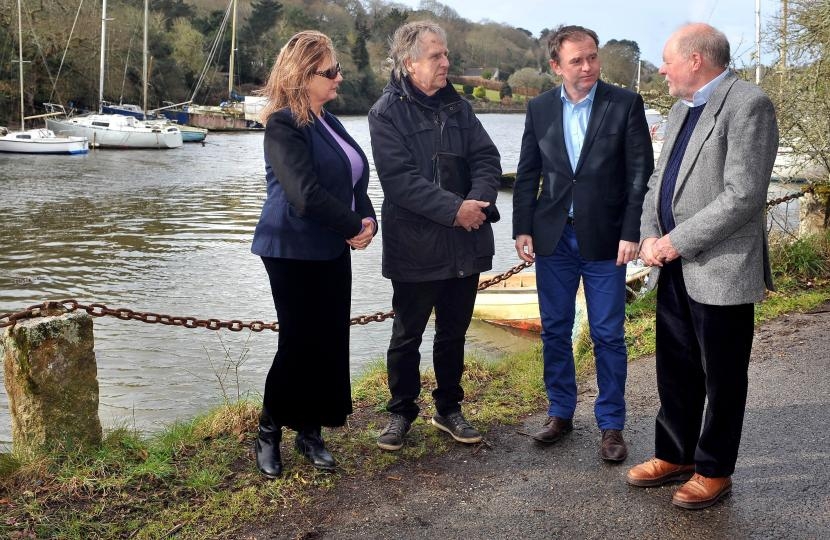 George has always said that there should be a principle of building on brownfield sites before greenfield sites, especially around our towns. Developments should also be done with communities, not to them.

There is no doubt that nationally we have a housing shortage.  A combination of population growth and issues like family breakdown means that many families are struggling to find a home that delivers their needs. In Cornwall, the issue is exacerbated in some areas by second home owners. So we do need to build more housing.

When Cornwall Council were developing their local plan, George argued that we should make clear that brownfield sites in places like Tuckingmill and around South Crofty should be developed first. There should then be a delay in developing greenfield, urban extension sites around areas like Treswithian until we have completed a mid-term review in ten years’ time where we could take stock and reassess local housing need. This would ensure that developers didn’t simply cherry pick easy greenfield sites.

Planning decisions will always be contentious and there are difficult balances to be struck. There are however some good examples of successful housing developments on brownfield sites which are designed to be consistent with, and to celebrate, our industrial heritage. Coastline regenerated the old Holmans site at Trevu Road next to Camborne Train Station and saved the beautiful Holman's building at the same time. Linden Homes have also done some excellent work at Pool on the site opposite Cornwall College. George has also been a strong supporter of the regeneration work started through the heartlands project and was pleased that many homes there were offered through the "help to buy" scheme.

George has felt it necessary to intervene in several planning applications of late due to concerns over the impact to residents and the local area:

Recently plans for a controversial student village between the Treluswell and Treliever roundabouts were unexpectedly approved. Like many, George was surprised at this decision. After all, it had been recommended for refusal. George had opposed these plans because his own view is that we should be looking to the Kernick Industrial Estate, and the space that is available there to build student accommodation instead. We should always try to make use of brown field sites before losing more of our green spaces and local residents have already accommodated a lot to allow the university to grow.

Plans to build 226 new dwellings at Menehay Fields, Budock, have also attracted criticism. A similar application was made in October 2013. It was refused by Cornwall Council and the appeal was dismissed. Cornwall Council have refused the plans this time, but the developer has chosen to appeal. George wrote to the Housing Minister and has asked that he recover the appeal. The minister recovered the appeal and a final decision is expected shortly. The decision at Budock is one of strategic importance, which threatens the continuation of Budock’s status as a village. The loss of green interface between Budock and Falmouth would effectively make Budock a suburb of Falmouth. Other more suitable locations have been found to meet local housing need.

Recently the Secretary of State wrote to George to confirm that the planning appeal had been dismissed and the case dismissed. The Minister concluded that, the proposed development would significantly harm the landscape character and visual amenity of the are including reducing the physical and perceptual gap between Falmouth and Budock Water. Concerns were also raised as to the loss of a valuable greenfield site. This is great news for residents and once more shows what can be achieved when local people come together. Thanks must also go to Cllr John Bastin for all the hard work that he has put in to save Menehay fields. His dedication and hard work has been invaluable and he played a major part in selling the appeal case and helping achieve this victory.

Recently it was learnt that an application at Troon that had previously been turned down had been appealed by the developers. George was very surprised at this due to the fact it had previously been refused. George wrote to the Planning Inspectorate, and asked that they uphold Cornwall Council’s decision to refuse the scheme. George had also worked with Cllr Rachel Goodman in looking to uphold the decision. In the last couple of days the Planning Inspectorate announced that they had dismissed the appeal by the developer and that the development would no longer be going ahead. This is another major victory for residents and our greenfield sites as we work hard to protect them.

In 2015 a planning appeal was launched for 220 houses on St George's Road in Hayle. At the time George wrote to the Secretary of State in the Department for Communities and Local Government to consider calling in the planning appeal. The proposals were opposed by many Hayle residents with the Town Council also opposing the scheme. At the time there were many other sites that should have been developed on before this greenfield site. Since then the planning appeal was lost and the scheme was blocked on that occasion. There has since been a large amount of investment into North Quay to build new homes and infrastructure around the harbour.