The Fishing Industry and Brexit 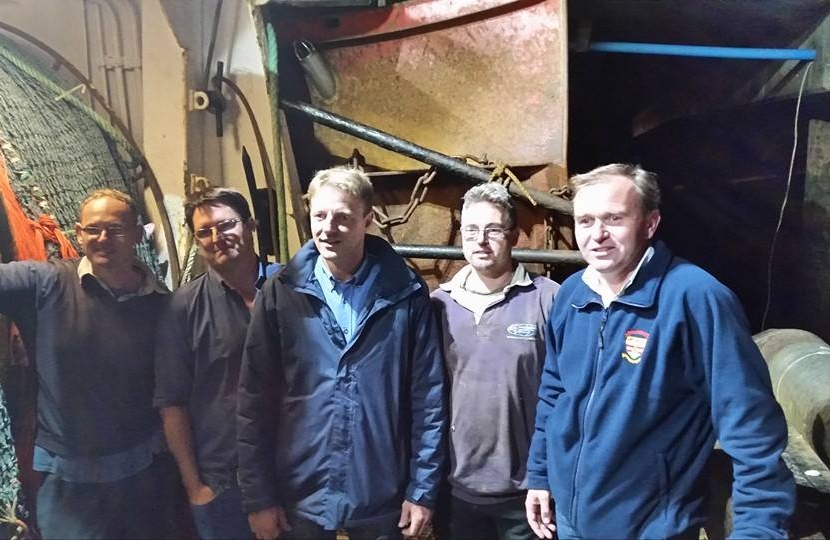 From the point of view of the fishing industry, the case for leaving the EU is overwhelming.  There are already well established conventions in international law that govern the approach to fisheries management between independent nation states which we see working elsewhere.  We already have huge amounts of free trade in cod with Iceland which is not a member of the EU so we know that free trade will never be a problem.  And, at the end of the day, Fishermen are just not the sorts of people to be spooked by trite, pro- EU campaigns that try to tell them they should be scared of the open sea.

I should make clear from the outset that there are some things we would definitely retain if we were to leave the EU.  We would still target MSY because if we want a profitable fishery for the future then we must fish sustainably.  We would still have a quota system because, while quotas are not perfect, they are the only system that works in a shared fishery with mobile species. We would still strive to eliminate the wasteful practice of discarding dead fish back into the sea.  Finally, international negotiation will always be crucial to effective fisheries management.

However, freed from the hindrance of the EU, the UK would assert itself as the lead power in the North East Atlantic to deliver fairness and sustainable fishing.  There are two key reasons why we would undoubtedly be better off if we vote to leave and take control.  Firstly, the North Sea is economically the most important fishery in the UK.  We are Europe's largest producer of mackerel and North Sea cod and haddock are vitally important fisheries.  However, fishing opportunities for stocks like mackerel are not even decided by the EU.  They are settled at an entirely separate organisation called the North East Atlantic Fisheries Commission through the annual Coastal States Meetings.  Norway has a seat at the table; Iceland has a seat at the table; The Faroes has a seat at the table.  But, extraordinarily, the UK, the country with the greatest interest in the North Sea is denied a seat at the table because we are a member of the EU.  Instead, our technical experts and diplomats are reduced to whispering in the ear of an EU negotiator and hoping they don’t mess it up.

On at least two occasions in the past year, EU negotiators have messed it up, unilaterally trading away the interests of Scotland's fishermen in order to give advantages to other EU countries.  First, they gave the Faroes increased access to UK waters to catch Mackerel and Blue Whiting.  Then, in December, they used UK Blue Whiting quota as currency to swap for Norwegian Arctic cod which countries such as Germany and Portugal wanted.  On the first occasion, the UK was not even consulted and on the second occasion our objections were ignored even though fish in UK waters were providing all the currency for the deals.   We should not allow this to continue.  If we vote leave and take control, we will regain our own seat at the table during these crucial fisheries negotiations relating to the North Sea.  We would represent our own interests at the Coastal States Meetings while the EU-Norway bilateral would be replaced by a new UK-Norway-EU trilateral deal with the European Commission representing any residual EU interests there might be.

The second reason for voting leave is particularly important for fishermen along the South Coast and the Westcountry.  Outside the EU, we would re-establish national control for 200 nautical miles or the median line as provided for in international law.  We would then be in the strongest possible position to re-open the issue of "relative stability" and argue for a fairer share of quota allocations in many fish stocks.

This principle has locked in some historic unfairness to the UK fleet especially in the Channel and the Celtic Sea in the far South West.  If you look at Cod in the Celtic sea and surrounding areas, in 2015, the UK allocation was just 834 tonnes compared to 5,500 tonnes for France.  For Plaice in the Channel, it was 1,300 tonnes for the UK but 2,600 tonnes for France.  In the Eastern Channel which is important to our south coast fishermen, the UK received 670 tonnes of Dover Sole in 2015 but France received 1,875 tonnes.  If we take control of our fishing grounds we will have the opportunity to revisit some of these issues with a view to delivering a fairer share of fishing opportunities.

When I have considered what might come in the next round of CFP reform post 2020, looking at relative stability, especially in the Channel and Celtic Sea, looms large because the stark injustice on some stocks stands out like a sore thumb.  But here is the problem: why would other countries, who have now established a recent history in having access to UK waters to take UK stocks support giving that up? Given the difficulty of getting anything done from within the EU, how realistic is it that we could reopen relative stability and get a "qualified majority" to go forwards rather than end up going backwards?

If we want to correct this historic injustice, there is only one way forward.  We must act decisively and cut the Gordian Knot. If we leave the EU we would take control of 200 nautical miles or the median line.  Everything would then be put back on the table for discussion including TAC allocations and access rights.  We would conduct an assessment of the zonal attachment of stocks and an assessment of spawning grounds and this science would help inform a new settlement.  We wouldn't deliver a result overnight and there would need to be a transition period.  But once the initial reform had been delivered, annual fisheries negotiations would then become simpler.  In place of the current December council there could instead be an annual UK-EU bilateral to settle fishing opportunities in the Channel and the Celtic sea.  We could actually get things done and deliver our objectives both for fishing and the marine environment.

This referendum is a one off.  We only get one shot at this.  If we duck the decision and allow ourselves to be scared and intimidated into dithering indecision, then we will be locked into the EU straight jacket for good with no control and we will regret it.  But if we act decisively and leave, we will regain control and will then have the power to deliver the change our fishing industry so craves.  In five years’ time, the only question we will ask ourselves is why we didn't do it sooner.