George welcomes the acquisition of Falfish by Morrison’s supermarket 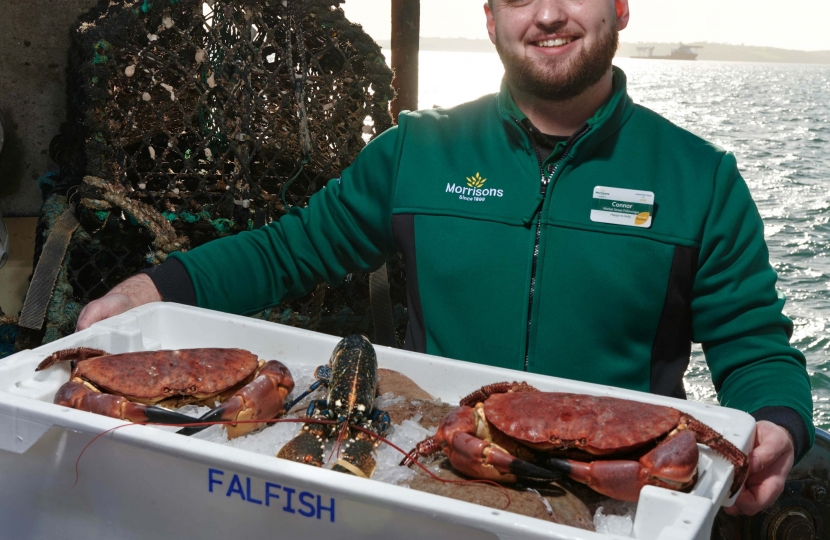 George Eustice, Member of Parliament for Camborne, Redruth and Hayle has welcomed the announcement that Redruth-based Falfish is being acquired by Morrison’s Supermarket.

Falfish, a family-owned wholesaler of sustainably sourced seafood has been a trusted supplier of high-quality fresh fish and shellfish to Morrison’s for over 16 years and approximately 50 per cent of Falfish’s c. £40 million turnover is with Morrison’s.

For customers of Morrison’s, the acquisition will mean further improvements to the range, quality and availability of fresh fish and shellfish at their stores and represents a significant investment in fresh food and food made by the company.

Falfish operates from two sites in Redruth and Falmouth docks on the south Cornish coast and is owned by the founder Ian Greet and his son Mark who is the Managing Director. Mark Greet and all c. 140 Falfish colleagues will join Morrison’s. The business has long-term relationships with the owners and skippers of over 70 partner boats in the South West who land their total catch direct to Falfish. Falfish’s buyers also buy direct from the three key South West fish markets in Newlyn, Plymouth and Brixham.

Following the announcement, George commented: “Falfish, based here in Redruth, is renowned across the UK as a trusted supplier of high-quality and sustainably sourced seafood.

“The announcement by Morrison’s that it has acquired Falfish is a real vote of confidence in the Cornish fishing fleet. It is good news for jobs in our local area, and  I am pleased to see that Mark Greet and all of his colleagues will be joining Morrison’s. I wish them well in the months and years ahead.”

Additionally, Andrew Thornber, Morrisons Manufacturing Director said: “Falfish is a great fit with Morrisons; not only is it a great British company supplying high-quality fish and shellfish, but they also share our passion for sustainability and for local sourcing.

“Bringing Falfish into Morrisons further strengthens our position as Britain’s biggest food maker. Our manufacturing operations employ c. 9,000 people at 19 sites throughout Britain, providing around 25 per cent of everything that Morrisons sells. The acquisition of Falfish means that over 80 per cent of our fish and shellfish will now come from our own operations.”

Mark Greet, Falfish’s Managing Director, also said: “Falfish has been a supplier to Morrisons since 2004 and over the years this has become a very strong partnership. For my father Ian and our family, as part of the Cornish community, this acquisition ensures the continuing ethos of Falfish in upholding our relationships and values, and strengthens this for our colleagues, for the South West fishing fleet, and for all of our customers and stakeholders. The acquisition is great news for Falfish’s Cornish operations and the wider community, bringing investment and access to many new opportunities.”