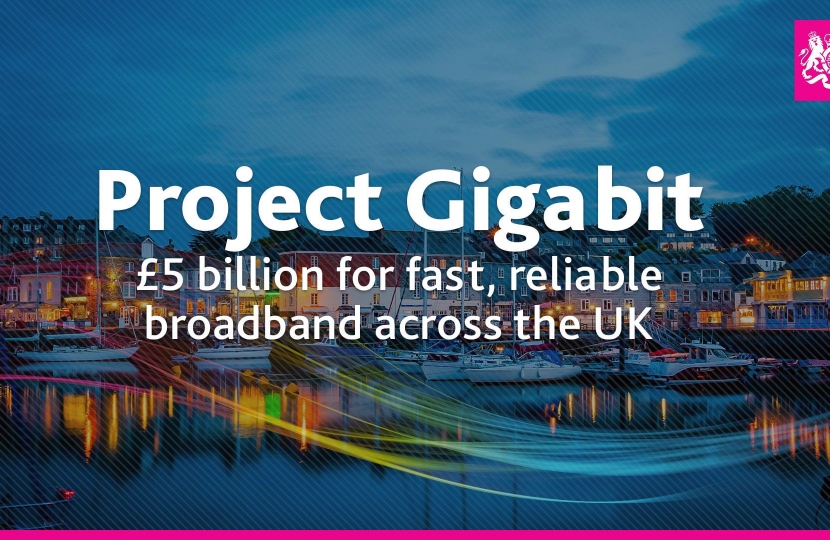 George Eustice, Member of Parliament for Camborne, Redruth and Hayle, has today welcomed the announcement by the Secretary of State for Culture that Cornwall will be one of the first areas in the UK to receive funding from ‘Project Gigabit’ for a super-fast, reliable internet connection.

The announcement of ‘Project Gigabit’ will bring £5bn in new funding for areas in Cambridgeshire, Tees Valley, Cumbria, Dorset, Durham, Essex, Northumberland, South Tyneside and Cornwall. The areas within Cornwall include Launceston, Callington, Looe, Camborne-Pool-Redruth and Penzance, with over 110,000 homes being able to access a Gigabit connection.

Their available speeds will rocket to more than 1,000 megabits or one gigabit per second. It means families no longer having to battle over bandwidth and will give people in rural areas the freedom to live and work more flexibly. Contracts for these first areas will go to tender in the spring with spades in the ground in the first half of 2022.

The government-funded projects will prioritise areas that currently have slow connections and which would otherwise have been left behind in broadband companies’ rollout plans. Gigabit broadband is being rolled out rapidly - from one in ten households in 2019 to almost two in five today. The UK is on track for one of the fastest rollouts in Europe and for half of all households to have access to gigabit speeds by the end of this year.

Following the announcement, George commented, “The announcement of Project Gigabit and £5bn in funding is a great boost to Cornwall. Ever since I was first elected, I have made clear that regeneration is my number one priority.

“This new scheme will allow homes and business all over Cornwall to benefit from a super-fast internet connection, helping encourage growth and creating new jobs, which is all part of this government’s ambition to build back better from the pandemic.”

Secretary of State for Culture, Media and Sport, and Digital Secretary, Oliver Dowden MP added, “Project Gigabit is our national mission to plug in and power up every corner of the UK and get us gigafit for the future.

"We have already made rapid progress, with almost 40 per cent of homes and businesses now able to access next-generation gigabit speeds, compared to just 9 per cent in 2019. Now we are setting out our plans to invest £5 billion in remote and rural areas so that no one is left behind by the connectivity revolution.

“That means no more battling over the bandwidth, more freedom to live and work anywhere in the country, and tens of thousands of new jobs created as we deliver a game-changing infrastructure upgrade.”